Mythical Creatures in the Philippine Folklore

Urban legends of the existence of these supernatural beings have passed down from generation to generation. The question is, are these creatures real or just an imagination? Whatever it may be, these have definitely became a part of our childhood. 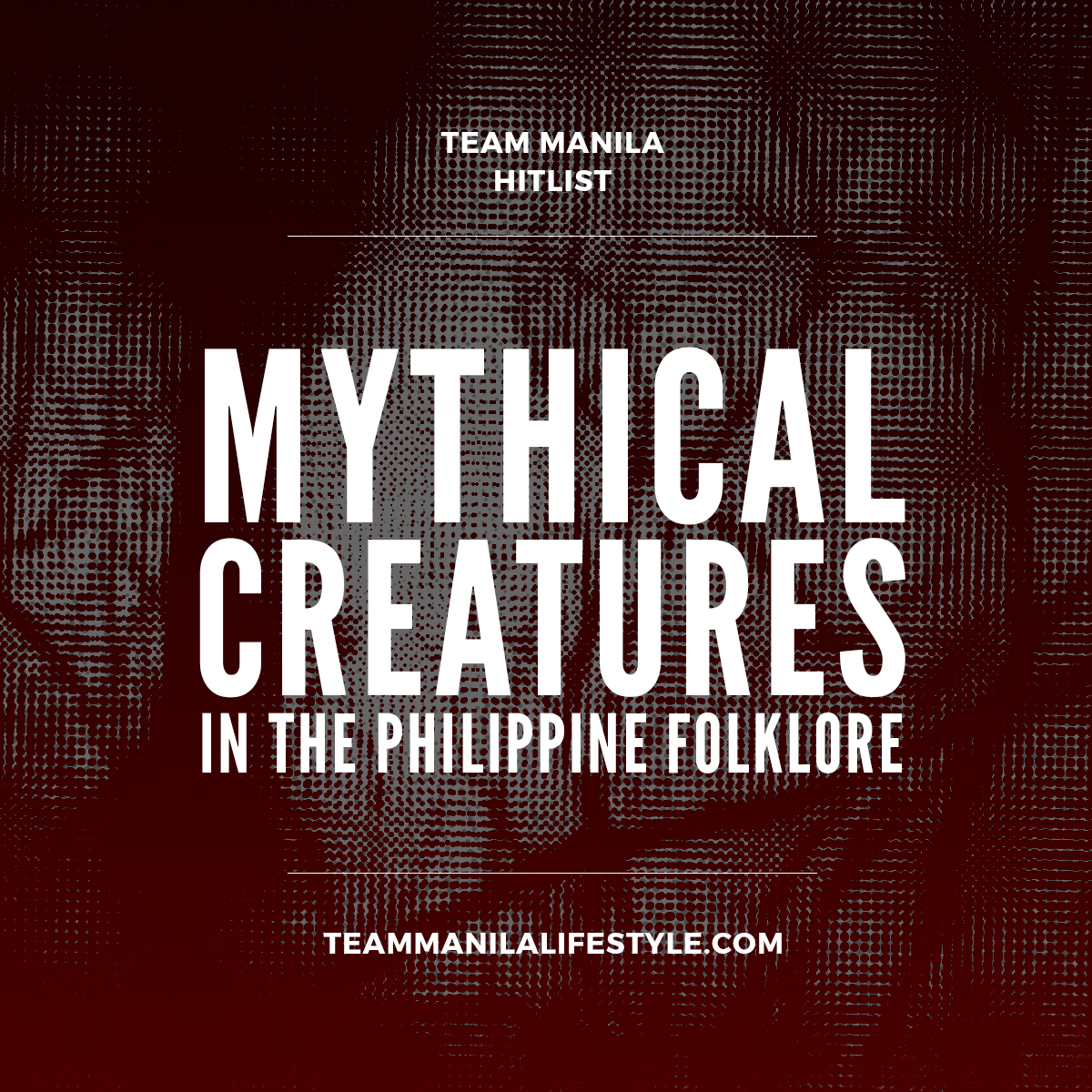 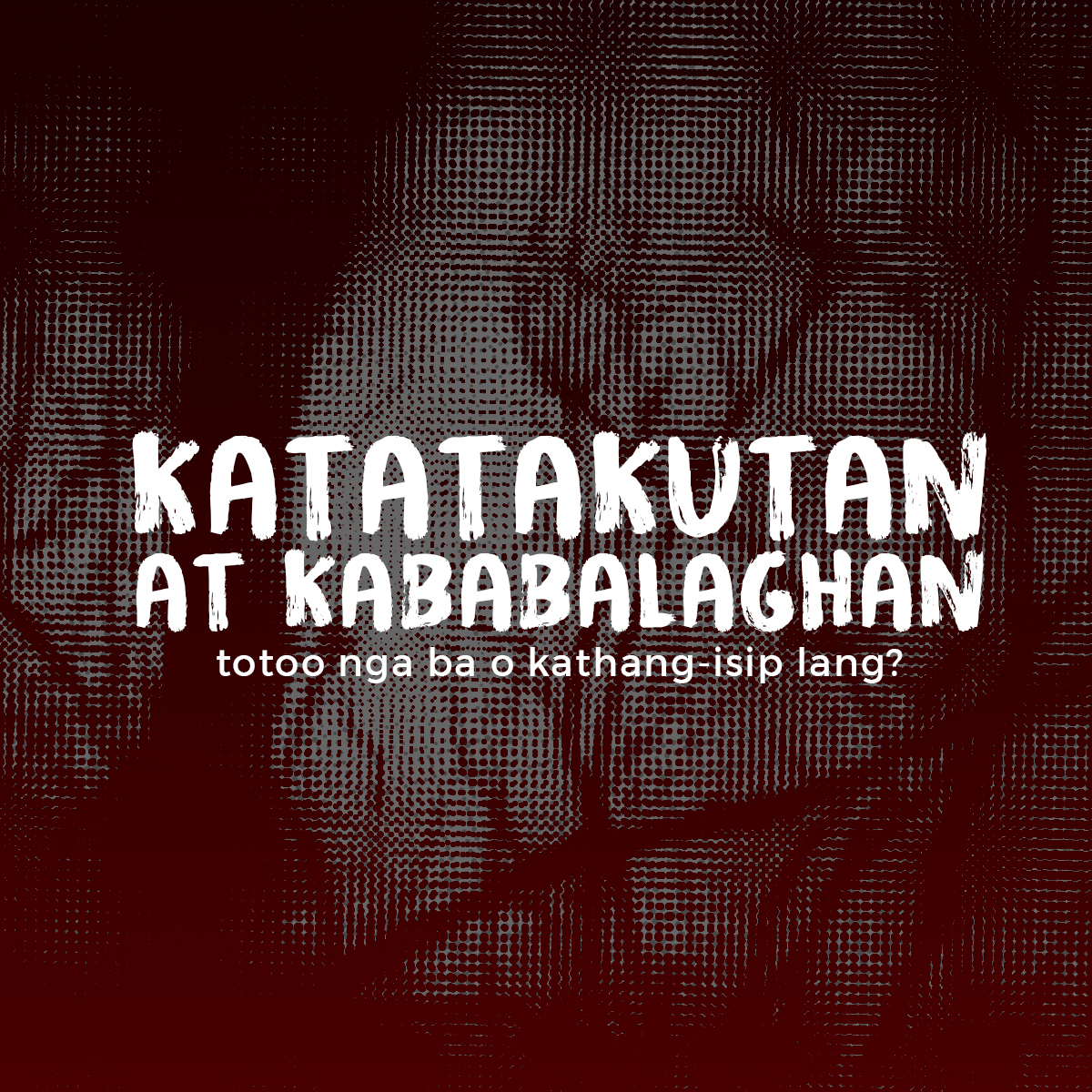 Read on and remember your peers’ horror stories or worse, your personal experiences from these beings and get to know the not-so-popular but still horrifying out-of-this-world creatures that chances are, you’ll be encountering soon. Just kidding.
Plus, we’ll be giving you helpful tips when you happen to encounter them. You’re welcome! 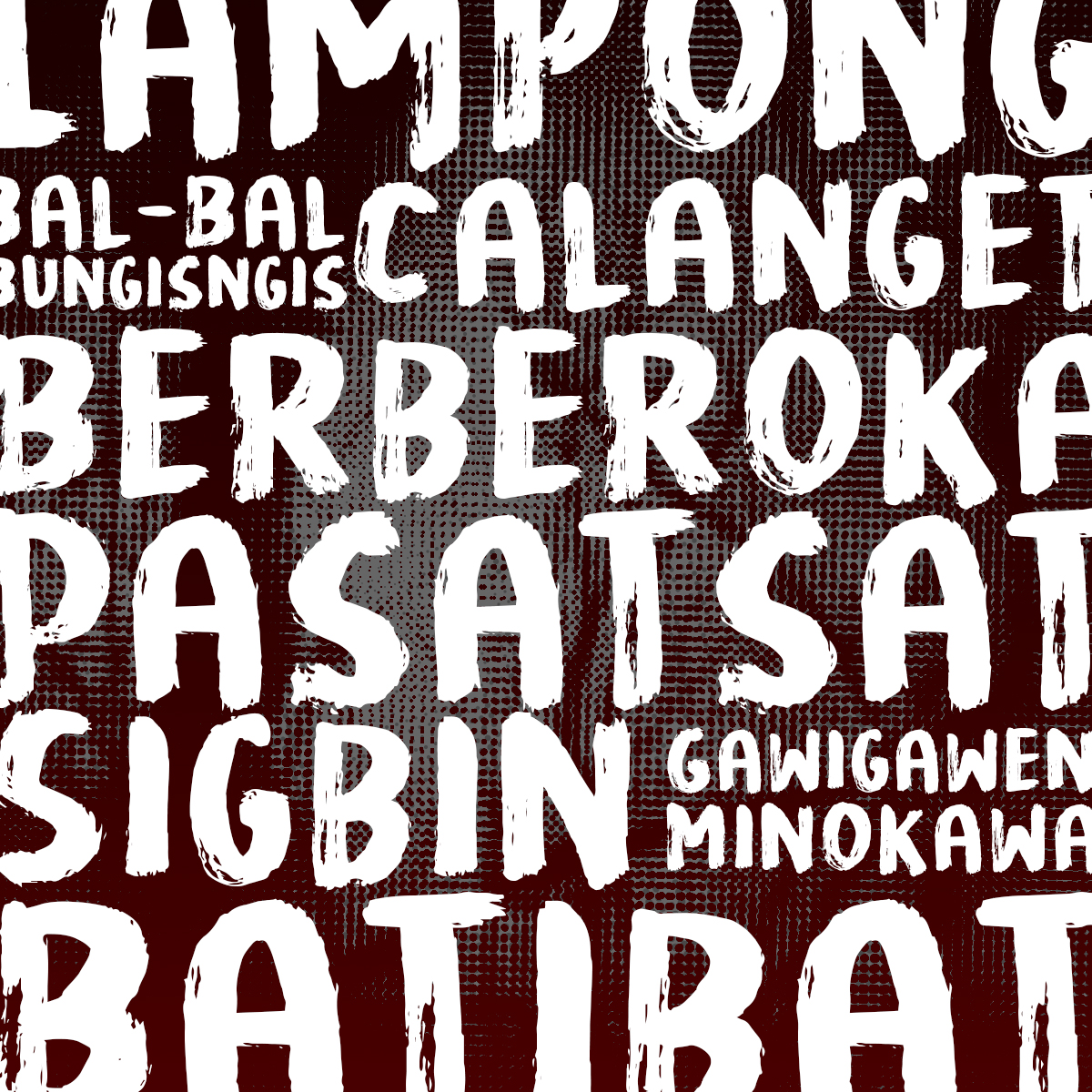 LAMPONG
This one-eyed white deer with a long beard lives in the forest and risks its life to save wild beasts. They become two-feet tall when first seen and later, wears tall, black, two-peaked cap.
TIP: Take an extra precaution in hunting animals in the wild. When you see them, just run as fast as you can.

BAL-BAL
A vampire-like creature that eats dead human bodies and leaves the trunk of a banana tree in the coffin to create an illusion of the stolen body. They have long and sharp claws and have a sense of smell ten times more sensitive than dogs.
TIP: Never leave the wake of your loved ones unattended.

BUNGISNGIS
This is a one-eyed giant humanoid who always laugh, showing his large teeth and tusks from the side of his mouth. They have this unusual strength that they can lift a carabao on their neck and thrown it on the ground up knee-deep down.
TIP: Do not be fooled by their giggle and prepare your tricks to them instead because they panic quickly.

CALANGET
These are tiny beings that dwell in the ground are regarded as “true owner of the land.” They make a whistling sound as a response to the call of Shamans.
TIP: Be careful in digging up the ground as it may disturb their home and bad luck will be inflicted to those who will do so.

BATIBAT
This demon from the Ilocano folklore causes nightmare or bangungot. They sit upon the chest of a sleeping person until he can’t breathe.
TIP: As much as possible, lie on the bed sideways.

BERBEROKA
A freshwater ogre deceives fishermen of showing a school of fish to easily drown and trap them.
TIP: Did you know that they have this unusual fear of crabs? Also, take extra care when fishing.

PASATSAT
They are ghosts in ghastly form that have died or killed when the Japanese invaded the Philippines. During that time, people cannot afford to buy a coffin so pamalisan (reed mat) is used to cover the dead and was buried in places other than the cemetery. Their name was derived from the Pangasinense term ‘satsat’ which means ‘to stab.’
TIP: When you see them in the streets, you need to ‘stab’ the pamalisan covering the human remains to get rid of them. This reveals an unpleasant odor instead of the actual corpse.

GAWIGAWEN
This six-headed giant that has gigantic weapons of war came from a legend entitled “Gawigawen of Adasen.” In the story, Aponibolinayen got sick and craved for oranges owned by the giant. His husband Aponitolau made a way to fulfill his wife’s request even if it means facing numerous obstacles. He passed the challenge of eating a whole carabao and died after picking two oranges from the tree made of knives.
When his son Kanag knew about his father’s death, he turned himself into an ant to escape the giant’s massive attacks and eventually, he killed the giant villain.

MINOKAWA
This is a giant dragon-bird that lives ‘above the sky’ with a razor-sharp feather that could cut everything it pass on while flying. The moon is their target that is why eclipse happens and will swallow the sun afterwards. They would try to do the same with the earth and start consuming all of humanity too.
TIP: People must make noise as to entice Minokawa to check on what is happening on earth so the moon will be able to escape from his mouth.

SIGBIN
This creature has varying descriptions—a wild animal with a size of a small bear and a row of spines embedded from neck to tail or a hornless goat that look like small kangaroo. Reports claim that they kill animals by leaving them headless or with deep puncture in the neck or by sucking the victim’s blood.
TIP: Keep an eye of your farm animals and your house pets. 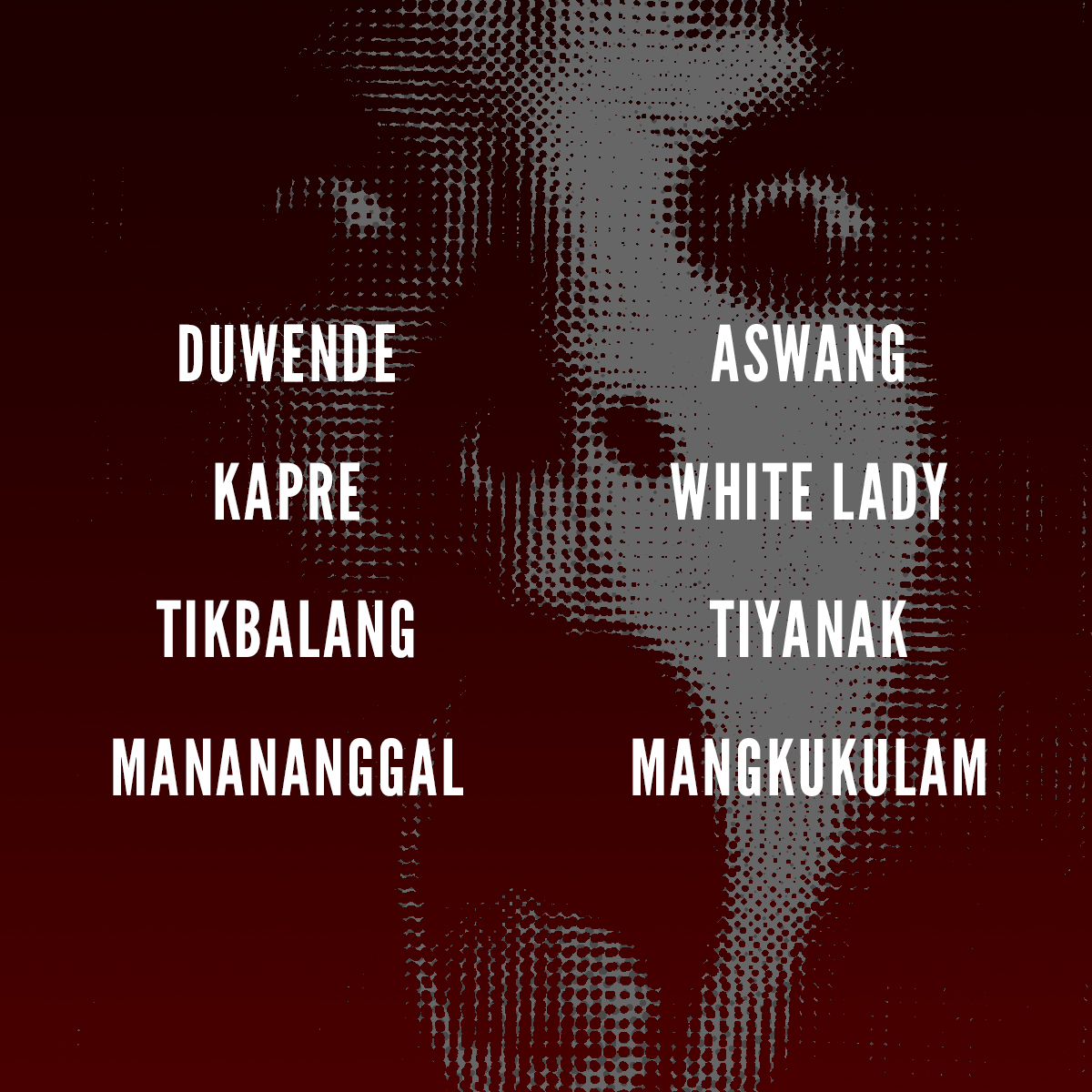 DUWENDE
Dwarfs are tiny creatures who dwell in mounds (punso), trees, houses and underground. There are two types—white dwarfs who are kind and bring good luck & black dwarfs who always do pranks.
TIP: To avoid being tricked, you are advised to say “Tabi, tabi po.” whenever you pass by the areas where they live, including the places you’ll visit for the first time.

KAPRE
These tall, dark and hairy giants that sits atop of large trees can be easily noticed with their glowing eyes and smoke coming from their huge cigar. They have a habit of scaring naughty children.
TIP: Children should avoid playing under a tree as their noise might disturb the Kapre.

TIKBALANG
Having the head of a horse and body of a human, this creature likes to play with people who are traveling. Folklore says that when the sun is shining when it suddenly rains, a pair of Tikbalang is getting married.
TIP: If you’re traveling either driving a car or walking around and find yourself stuck in a place and just going around in circles, take off your clothes, reverse it and wear them again.

MANANANGGAL
They are also referred to as ‘Tik-tik” due to the noise it makes while flying with their upper half body. They have proboscis-like tongue to get the human heart and fetus inside the womb.
TIP: Before the daylight comes, sprinkle salt in their lower half body to prevent their body from joining back.

ASWANG
They are creatures with milk-white eyes who are hungry for human flesh. They can be in human form but can also transform into a huge dog or large pig. When a human gets bitten by them, they can turn into an aswang as well.
TIP: They are afraid of garlic. Feel free to make a necklace out of it so it can be easily thrown at them.

WHITE LADY
These spirits that still wander in this earth because of unfinished business due to unjust cause of death so they seek for revenge. They usually appear in roads, abandoned buildings houses and backseat of cars.
TIP: Be prepared because they could show up to close relatives when they are still alive.

TIYANAK
There are many beliefs that they could be an offspring of a demon, a baby who died without getting baptized or an aborted fetus who seeks for revenge. You will hear their cry in the middle of the wood that will make you follow the sound. When carried, they disguise as a normal baby then turns into a creature with large and sharp teeth to attack you.
TIP: Just ignore that random crying sound. You’ll thank us later.

MANGKUKULAM
Sorcerers prick voodoo dolls with a needle to inflict pain or illness to their enemy. They also cast evil spells if someone did something bad to them.
TIP: Do not make them angry or else you already know what will happen next.

Have a personal experience with one (or all) of them? Might as well share your own horror stories and make your sleepovers even more exciting.
Enjoy your hair-raising midnight storytelling!